Dumb and Dumberer for Notaries

Filed under: Movie Themes,Popular on Linked In — Tags: Dumb and Dumberer — admin @ 8:15 am

Harry and Lloyd set out to become notaries. Little did society (or the county clerk) know that they would be the dumbest notaries in human recorded history.

HARRY: I just got my new notary stamp.

LLOYD: Don’t forget to lick the stamp before you use it.

HARRY: Ha! I’m already ahead of you, my friend. (Sticking out tongue and revealing indented tongue from embosser.)

LLOYD: (sticking out his tongue) No, you’re not. I licked your notary stamp first!

HARRY: Ewwww. That means I licked where your tongue already was.

LLOYD: I guess. But, why do I have to tip you if you’re doing the job for someone else?

SAMANTHA: Thanks so much for coming. It’s so hard to find a Notary at the last minute.

SAMANTHA: It’s a figure of speech. There will be other minutes.

(Harry had Samantha sign the journal inside the book cover like an autograph. Then he attached a certificate to the documents. He wasn’t sure if Samantha was a guy or a chick, so he crossed on the he/she/they, used white out and wrote “it” in handwriting. What a dumb thing to do.)

LLOYD: Aren’t you forgetting something?

HARRY: Oh yeah… (he licks his stamp after he affixed it. Luckily Samantha was too dumb to know the difference)

SAMANTHA: Thanks so much. I might need help next week with a lien.

HARRY & LLOYD: We’re good at that — watch this. (they both lean, bracing themselves against the wall.)

SAMANTHA: And a Quaker friend will need a notarization with an Oath.

HARRY: No problem. I’ll bring a box of them!

(The next day, a call came in from Dave who needed a notary for his Affidavit of Statute of Limitations for his Attorney) In looking up Harry’s profile, he noticed he’d written that he was a hard worker and had a professional misdemeanor.

DAVE: Hi, I’ll need a Notary. Can you meet me in the park for the notarization? It’s near my Attorney’s office.

HARRY: Your attorney lives in a park? Cool! I know this great fountain where we can meet.

(They both arrive. At the fountain where there is a statue)

DAVE: I’m so glad you could help. Here’s my document.

HARRY: Document? I already did the work, dude. See my seal over there? It’s on the statue of limitations. It was hard to find a clean spot next to all the bird droppings. Maybe that’s why it’s so limited. The person assigned to keep it clean is also limited if you ask me.

DAVE: What? You birdbrain!

HARRY: Thanks! Not that I’m smart enough to crap on a statue.

(The third day, he did a notarization for Luke)

HARRY: Okay Luke, you called for Quaker oats, and I brought you two boxes. Wanna warm some up?

HARRY: Oh, so that’s the part of the manual I read wrong. Let me get my hat. Okay, now swear.

LUKE: That’s not how it’s done. I’ve been to many notaries before.

HARRY: So, how do you do an Oath? This is my first commission, and probably my last if I don’t get suspended or held back a year.

LUKE: You start by asking a question, like, do you swear that you agree to the terms in this agreement?

LUKE: It’s not that kind of swearing, it’s the type of swearing like when you swear to tell the truth.

LUKE: I also need a Will notarized.

LLOYD: And a way?

LUKE: A way to notarize the will?

HARRY: Okay, anything else?

LUKE: I heard that you could do e-signatures too?

HARRY: No, I don’t mess with that. I heard some Notary dude got electrocuted doing an e-signature. I saw a picture of him in the paper with his hair all frizzled. That’s a “don’t try this at home” type of notarization.

(The fourth day, they were asked to help sign a loan. The loan docs were late, so Harry took matters into his own hands.)

HARRY: What are the documents supposed to be in a loan?

LLOYD: Well, there is a Deed. So, we could do a Deed. Then there’s the Note. I have a note from my gym teacher saying I’m not fit to play volleyball. And if they don’t like that, I have this G# I lifted from music class. There is a Right to Cancel too. I could draw that up on my computer. Then, there is a HUB. I could bring the hub cap that’s been sitting on the corner for about a week. Here, help me. I want to put all of this in a box so we’ll be prepared.

HARRY: Lloyd — you’re the greatest friend a guy could have! And one of the smartest, and most prepared friends too!

LLOYD: If a smart guy like you thinks so, it must be true!

Compilation of Stories on the blog categorized
http://blog.123notary.com/?p=21898

Compilation of posts about Snapdocs
http://blog.123notary.com/?p=21531

Honey, I notarized the kids (don’t try this at home) 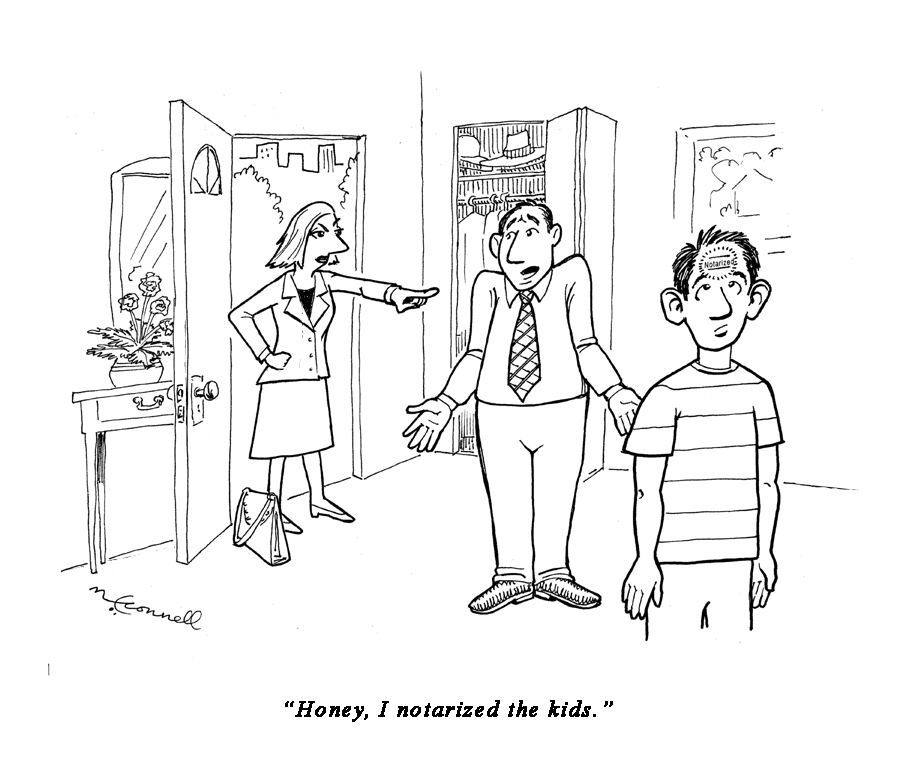 “Because someone is coming. Someone from the bank is coming to see us…”

Joey started chasing Milly around the house… “Joey! Milly! STOP THAT– stop running or the notary monster will notarize you!”

“What’s ‘notarize’? Who does that? What is it?” Milly squeaked.

“The notary has this big clamp. He puts it on the paper we are signing… and if you are not good, he will clamp you with it, too. And it will hurt!”

Joey jumped up and tried to touch the lamp hanging from the ceiling. At that moment, the bulb popped…

The Notary arrives
I opened the door. It was Mr. Eugene the notary. He was about 5′ tall, with black hair streaked with gray…and he had dark inky circles around his eyes. He carried a notary bag and walked with a limp toward the table. “I’m Mr. Eugene,” he pointed out.

“Eugene– great to meet you. We are going to whip through these documents…but we might also want to notarize these kids,” I winked. But let’s do the signing first.”

We did whip through the documents. He was a thorough notary, and seemed very intent on every detail. When we were done, I asked, “May I see you in my office here?” I led the way…

“I really shouldn’t do this… ” he looked blank.

I decided then and there to be the notary monster myself.
I had cut up an inkpad (I had one from my clerical days) and made a cardboard stamp that read “notarized.” The stamp was 6″ across and looked scary…especially when I inked it up with black ink. I put on the two-headed black monster mask, adjusted it, put on the cloak, grabbed the seal… Mr. Eugene followed me out of the room. He looked worried.

“Where are you kids?” I bellowed in a strange, foreign, angry voice. The stamp said notarized backwards turned like a mirror image…

“No! NO!” yelled the kids, running away from me…” I caught them just as they were headed into the garage… and stamped each of them on their foreheads…then all over their arms and legs…

“What do you mean?” she asked. I heard the door slam. It was Mr. Eugene.

“I’ll explain later… I can explain… Don’t call the police.”

Tweets:
(1) Kid: “Do I have to be good?” Mom: “Stop running or that Notary monster will notarize you!”
(2) The stamp said “notarized” backwards turned like a mirror image. The kids were terrified.
(3) I decided then and there to be the notary monster myself.
(4) The notary has this big clamp, and if you’re not good, he’ll clamp you with it, and it will hurt!
(5) I cut up an ink pad and made a cardboard box that read “notarized” backwards like a mirror image.
(6) Frank: “Honey, I notarized the kids.”
Molly: “What do you mean?”
Frank: “I’ll explain later, don’t call the police!”